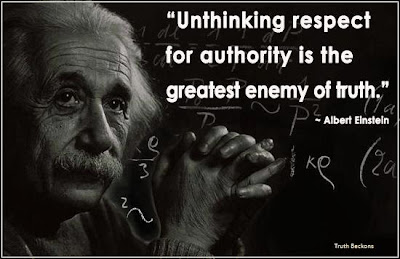 Did he really say so? Quote Investigator might know...

Among the other things he is also quoted


“Whoever undertakes to set himself up as a judge of Truth and Knowledge is shipwrecked by the laughter of the gods.”

“Science without religion is lame, religion without science is blind.”

“Logic will get you from A to B. Imagination will take you everywhere.”

“Only a life lived for others is a life worth while.”

“The important thing is not to stop questioning. Curiosity has its own reason for existing.”

“If we knew what it was we were doing, it would not be called research, would it?”

“Once we accept our limits, we go beyond them.”

“The only reason for time is so that everything doesn't happen at once.”

“Common sense is the collection of prejudices acquired by age eighteen.”

“Never do anything against conscience, even if the state demands it”

“Anyone who doesn't take truth seriously in small matters cannot be trusted in large ones either.”

“Small is the number of people who see with their eyes and think with their minds.”

If Quote Investigator thinks these quotes are from Albert Einstein and not from someone else they provide us with some clues how the mind of a famous Patent office worker smashed the mental moulds that had imprisoned humanity in a Newtonian mechanistic world.