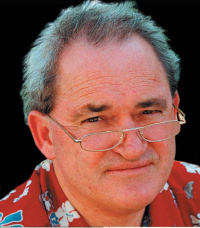 
Wikipedia tells that "John Hartnett (born 24 March 1952 in Manjimup, Western Australia), is an Australian physicist and cosmologist active in Creation Ministries International and known for an ardent opposition to the Big Bang theory and criticism of Dark Matter and Dark Energy hypothesis.

He has published more than 170 papers in scientific journals and conference proceedings, holds 2 patents and participates on a Sapphire Clock Ensemble project (Atomic Clock Ensemble in Space Mission) run by European Space Agency. He also writes articles for several creationist journals.
...
According to Moshe Carmeli, Professor of Theoretical Physics at Ben Gurion University in Beer Sheva, Israel, Hartnett in his theory demonstrated that there is no need to reckon with the existence of the dark matter in the universe.
wikipedia


Chicago 1978 declaration
Research professor John G. Hartnett associates himself with Creation Ministries International and contributes there to the discussion of God's creation and modern science. Not in generic terms but in the very specific terms expressed in the Chicago 1978 declaration of the Inerrancy of the Bible

4. Being wholly and verbally God-given, Scripture is without error or fault in all its teaching, no less in what it states about God's acts in creation, about the events of world history, and about its own literary origins under God, than in its witness to God's saving grace in individual lives.


Ussher chonology and Young Earth Creationism
The Biblical hermeneutics expressed by 300 evangelical leaders in Chicago declaration is at the source of the solemn faith that, regardless of what appears to be true about the age of the world, Universe was in reality made during the Seven Days of Creation in the year 4004 before the birth of Christ (Ussher chronology) or 5722 years ago (Jewish religious calendar) as can be learned from the holy Scriptures.

James Ussher chronology was included in the King James Bible and other versions of the Bible and was soon associated with the Word of God as the authoritative version. At the time the Irish Archbishop studied world history the Bible was by far the most extensive source its genealogies reaching beyond the Classical Roman and Greek sources.

Ussher chronology counts the time of creation from the genealogies beginning from Adam and Eve in the Paradise. It is pretty good in dating the later periods in the Bible and Mediterranean region.

Especially US baptist churches seek for a solid foundation to our faith and sanctifies Authorized King James Version as the Bible inspired by the Holy Spirit. Together with KJV these solemn Christians also adopt Ussher chronology.

Any Young Earth Creationist who suggests dates before the creation of the world around 4000 BC has lost the foundation of the genealogically generated Ussher chronology and must explain how the Days of Creation in the first book of the Bible should be understood.


The age of Cosmos
As an astrophysicist and student of cosmology Hartnett meets scientists who claim that sunlight reaches Earth in about eight minutes photons travelling at the speed of light. Reflected sunlight from the Moon reaches earth in about one second.

Creationist believing in Ussher chronology must face not only the challenge of Lyell's uniformist principle that geological phenomena, such as the carving of a Grand Canyon by water, happens at uniform speed throughout the history of Earth.

Consistent faith requires that such creationists also demonstrate that the age of the entire Cosmos, starting with Big Bang or forever existing or whatever, is no more than 6000 human years.

In this front facing modern Astonomy active work is going on in Creation Ministries with the authoritative help of established scientists. John G. Hartnett is cited as a leading beacon among these interpreters of God's creation based on the faith that the Bible is literally true.

None of the articles written "to several creationist journals" are listed in the list of the publications in the University of Western Australia profile for research professor John G. Hartnett.


Red Shift
Pulsars give crucial data for measuring distances in the space. Red shift of the spectrum gives key data for the dating of the suggested Big Bang. Research is going on and surely professor Hartnett has

For example, in 2008 John G. Hartnett wrote with Koichi Hirano a scientific paper


IMHO
Young Earth Creationists are people with truly good intentions to defend Christianity and the authority of the Bible. Instead of this, these Christians are causing serious damage to the religion by twisting both the holy Bible and creation into something that is not true. The dualistic way the natural scientists among them consider reality suggests that God of Israel is a minter of false coins.
Posted by Unknown at 10:23 PM